Mautic continues to grow at a fantastic rate and we have seen incredible success from Mautic 1 and then Mautic 2 with each release. Our community has grown and We’ve been finding and fixing bugs at a tremendous rate and our community as a whole has contributed to some impressive stats for the product.

And over the Mautic 2 series lifetime there has been much learned by our community and our product. There's an entire post just in the changes and improvements made, but here's a few very brief highlights: we’ve released 28 versions, and included 1,132 total merged pull requests from a total of 1,272 active users.

But this is an exciting time for Mautic. As the community has grown and as the number of contribution has grown we’ve had the opportunity to create a platform that rivals any other marketing automation platform on the planet. We’ve created an open source platform that offers the same functionality and features as other platforms which have existed for much longer and charged people much much more. We’ve done all this because of our community. This has been an exciting time, A truly exciting time. And now, things get taken to the next level.

Mautic 3 is the next major release of our product and there has been significant buzz around this release already. We have been actively discussing some fantastic ideas and some ways in which Mautic will not only compete with but begin to differentiate and truly lead the way for the future of marketing technology (MarTech). These discussions have lead to some revolutionary thinking and some new ideas only made possible by a couple of factors.

First, Mautic has a global community full of passionate, engaged Mauticians. Our community offers insights and viewpoints that others don’t have. We have an incredible range from small individual users all the way to Fortune 500 companies using Mautic and discussing ideas. We began Mautic 3 with an intense focus on listening to these ideas.

Second, Mautic is founded on open source and an open source framework. This extreme openness allows the code to be manipulated, improved, and used in ways other platforms could never be used. Mautic can expand technically to new ideas that others never would due to their proprietary nature of code, their misguided belief in data control, and the mechanisms by which they generate their revenues.

But this article is not focused on the features of this coming release. Instead, there remains to be discussions held, ideas uncovered, and new technology to be decided upon before implementation. But this is what is being undertaken now. This is the future of MarTech.

Here, we outline a roadmap and a timeline of sorts for our implementation of this next release. Before you review this timeline and dismiss it as too much, we urge you to consider that an aggressive approach is what Mautic has always been about. We believe in identifying and chasing after what we believe is right. Not every deadline may be hit, not every goal attained. But when there is so much at stake and we have so great a sense of urgency for what must be done, what the world should have free and open access to, how can we be timid. Our approach must be aggressive. Our intent strong, and our motivation powerful.

Keeping that inner drive and our community’s vision in mind here is the tentative timeline for Mautic 3. 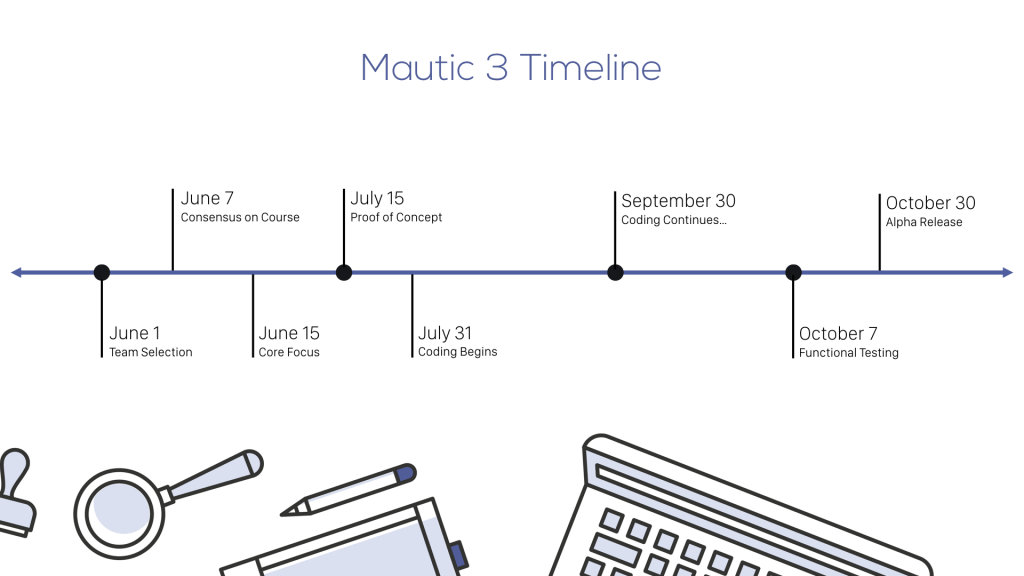 Now, in regards to the continuing support of Mautic 2. It is important to know that while Mautic 3 is being developed there will continue to to be bug fixes released for Mautic 2. Our community of developers will continue to address and patch critical issues and improve the overall stability of the Mautic platform as it exists today. Of course this will be a delicate give and take as we consider both the current and the future implications of each fix, but we believe that a strong, well-supported Mautic 2 will continue to be maintained throughout the entire Mautic 3 development cycle.

Side Note: Some have expressed concern over a migration path from Mautic 2.x to the Mautic 3 release. The goal and intent of our community is to ensure a smooth and seamless transition. Of course, there will be changes that may require more than a typical upgrade, however, we learn from others and we are making a migration path a priority.

Finally, this is a time to call for volunteers. If you are technical, your skills are greatly needed. We are actively in the early discussion phases for Mautic 3 and those discussions occur in our Slack core channel. Come join us and share your ideas. Perhaps you’re interested in continuing to improve the Mautic 2 stability. Your talents are needed. All current issues are tracked in GitHub and pull requests are being actively merged for the next 2.x release.

Lovely guys, this is going to be huge!

When the new version can be expected? Is this going to support a newer version of Symfony?