Image by Gerd Altmann from Pixabay

Another quarter has flown by, so it’s time for our round-up report of what’s been happening in the Mautic Community over the past three months!

This quarter has seen steady progress being made in several areas of the community, and work beginning on some big projects that will be happening over the next few months.

We have been following through on our commitment to setting up the conditions for a community that is supportive and welcoming to all, with a review of our Code of Conduct being published and the creation of a new space on Slack for LGBTQIA+ members (or allies) in the Mautic community who want to connect and/or talk about inclusion in the community.

Now for some updates from our teams.

The Community Team have been working behind the scenes to put together MautiCon 2020 - our first World Conference - which will be held virtually on the 17th November 2020. Sponsorship packages are selling out quickly and tickets are available on a ‘give what you can’ basis starting from $5.

We have received almost 60 session submissions from around the world, and I’m excited to see a lineup of diverse speakers sharing everything from how to run Mautic at scale to how they created a thriving meetup group and best practices for using Marketing Automation. We even have a track for Community and Open Source where we’re welcoming speakers from other sectors and projects who will be giving some fantastic talks.

The Product Team have hit all the release dates for the quarter, with sprints being held on the Friday and Saturday prior to the release freeze and Release Candidates being made available for a week prior to each stable release being issued.

We have released 3.0.2, 3.1 and 3.1.1 over the past three months, and welcomed a new Release Leader, Mohammed Abu Musa, who led the 3.1.1 release in September supported by Dennis Ameling.

We had some great new features ship with 3.1 - make sure you check them out!

Considerable effort has been made to clean up our issue queue and ensure that all pull requests have been assigned to a milestone, properly triaged, and the authors know what the next steps are to get their contributions merged.

This is reflected in the great progress being made with regards to reducing the open issues and pull requests, making it much easier for the team - and potential contributors - to see what needs work and when their contributions could expect to be merged. 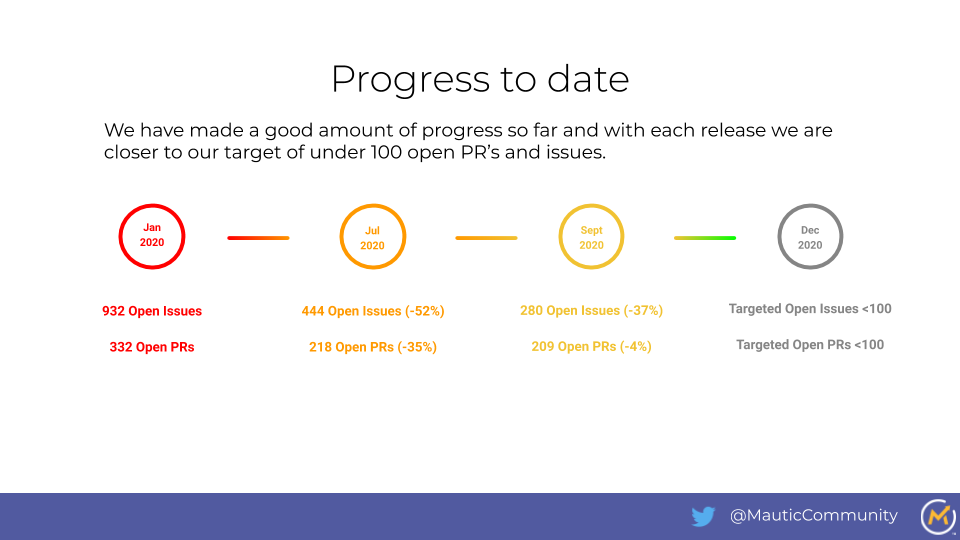 The team also updated the governance process that is used when reviewing issues and pull requests, which you can read more about in this blog post.

The Education Team has been working closely with our Season of Docs candidates and just launched the new Knowledgebase on 1st October which is already growing in popularity - if you want to contribute something, take a look at the detailed contribution page and the team backlog which has a list of articles they would like to include.

The Legal and Finance team recently published an update to the Trademark Policy and implemented a process for people to request a license to use the Mautic Trademark, as well as reporting infringements and asking questions.

We also launched Open Collective and Github Sponsors as a way of managing the finances of the Mautic project. It has been a great success with several organisations and individuals becoming contributors already.

Open Collective is also being used to manage the finances for the MautiCon event, which allows for full transparency over incoming funds and outgoing expenses.

A financial policy has also been created which explains what the Mautic Project will cover in regards to expenses, and the associated financial processes.

Work is underway to re-initiate the Mautic Community newsletter and mailing lists which we expect to be completed by the end of the year. There is also a ‘meet the contributor’ series which is about to be launched for the Community Blog.

The Marketing Team are particularly short of contributors, so if you would like to help please do get in touch with them via the #t-marketing Slack channel.

Things are continuing to move forward with each new release of Mautic, and we are getting into the rhythm of our monthly releases.

The contributions we are seeing to Mautic’s core Github project have largely stabilised after the work to release 3.0 saw a large spike in commits.

What is good to see is the rise in contributions from the community. The chart below shows all contributions excluding those from Mautic Inc/Acquia and we can see a strong increase over the past months.  We hope that this will continue to grow as we move forward!

We continue to attract new developers who are submitting pull requests to the Mautic repository, with the chart below showing where a contributor has made their first contribution during that month.

With a continued effort by the Triage Team to close down old issues, respond and deal with new issues and make sure that there is a speedy response, we have seen one of the highest rates of efficiency at managing issues - BMI.

This suggests that we are getting better at dealing with open issues, and becoming more consistent with our triage process.

For reference, Backlog Management Index (BMI), is defined as the number of closed issues divided by the number of open ones in a given period of time. This metric measures our efficiency at closing issues.

We expect this to drop somewhat over the next quarters having dealt with the majority of the 900+ open issues, as we settle into a rhythm when it comes to managing our issue queue.

We have seen a significant improvement in the median Time to Close this quarter, going from 11.439 days last quarter to 2.913 days this quarter, which means that issues are getting dealt with much more promptly.

As we are closing down old issues we are still seeing spikes in the lead time - the time it takes for an issue to be closed - but we expect this to stabilise soon with the establishment of our Triage Team.

Moving on to pull requests, we are continuing to see a growth in pull requests from the community over time, which is great! The Product Team are working on the resources we have available to help people contributing to Mautic for the first time - take a look at the onboarding resources here.

We are continuing to work through the backlog of pull requests (over 300 at the start of the year!) and with the 3.1.2 release we finally dipped under 200 open PR’s!

Our aim is to get that under 100 by the end of this quarter, so we have a lot of work to do!

The chart below shows open and closed pull requests based on when they were originally submitted - the red areas show that we do still have some very old pull requests that need to be merged, many of which need to be updated for Mautic 3 or have automated test coverage improved before they can be merged.

If you’d like to help us with that, please do join #t-product on Slack (get an invite at https://mautic.org/slack if you’re not already on Slack!) as we would welcome help on this task!

We expect the 3.2 release to merge a lot of new features, but to do that we need people to help us testing them.

Please do join the Product Team as above if you’d like to help with this. You don’t need to be a developer to help with testing new features - we even have a test instance of Mautic for you to use!  Plus, you get to play with the new features before they are released!

In terms of the wider community, when we take into account Github, Slack, the Forums and Meetup we are continuing to see a somewhat stable number of active contributors - not as many as in the early days of Mautic, but definitely higher than we have had over the past few years.

If we look at the rolling average we can also see a big jump at the beginning of the new year (when we did some maintenance in the forums to close old threads) but on the whole, the community is seeing a fairly consistent number of contributors with a slight upward trend.

A huge amount of work has been going on over the last quarter, across all teams in the community. We are continuing to move forward with clearing up our technical debt and welcoming new contributors to all teams.  It is great to see the project starting to manage its own finances and I believe this will be a solid foundation for future growth.

We are looking forward to some exciting projects coming to fruition by the end of the year, including our next minor release which has several great features being introduced. We will also be holding the first World Conference - MautiCon - which is already shaping up to be a great event!

There are many ways to help be a part of making Mautic great, and many people on hand to get you started. If you'd like to be involved, feel free to drop me an email at [email protected] or drop a message in #community in Slack, and we'll help you get going!